BREXIT – The Effects of the Vote to Leave the EU!

I actually put off writing this post for a little while, because I don’t want to introduce any political talk to AndrewMinalto.com – we all know how quickly that can go sour!

However the UK’s vote to leave the European Union has some huge implications on us as importers and online sellers and although there are still a large amount of unanswered questions (it’s only just the beginning really) I think it’s necessary to cover Brexit now and try to assess what it means for us.

Now before I go into detail, I think it’s very important to reiterate that at the moment, it’s incredibly difficult to predict the outcome of Brexit – simply because there are currently a number of unknown factors and it really depends a lot on which of the two main possibilities play out.

And those two possibilities are:

Now I think (well I hope) that most people will agree that Scenario A is by far the more preferable option as having to complete the full customs procedure for all exports to the EU will mean:

Now some of you may be thinking – “but wait a minute Andrew – surely this works both ways and it means less UK customers will be buying from EU sellers!?”

Well yes, that’s true as well and that’s one of the reason it’s so hard to say what the result of this Brexit will be. The same thing may be a negative to some sellers but a positive to others… BUT overall less trade between the UK and the EU is only going to damage the economy and thereby create a lot of negative knock-ons.

And actually that’s an important point I wanted to bring up.

We can’t just talk about things specifically but we also have to consider the overall economic affect. Even if nothing actually changes from Brexit, then the possible implications and fears will still make a big difference.

And the last week or so has been the perfect example of this. I mean for all intents and purposes, nothing has actually changed yet – it should be business as usual.

But a quick look at the stock market or better yet the exchange rates will tell you that that’s not the case.

Here is a chart showing the exchange rate for GBP to EUR over the last 10 days or so: 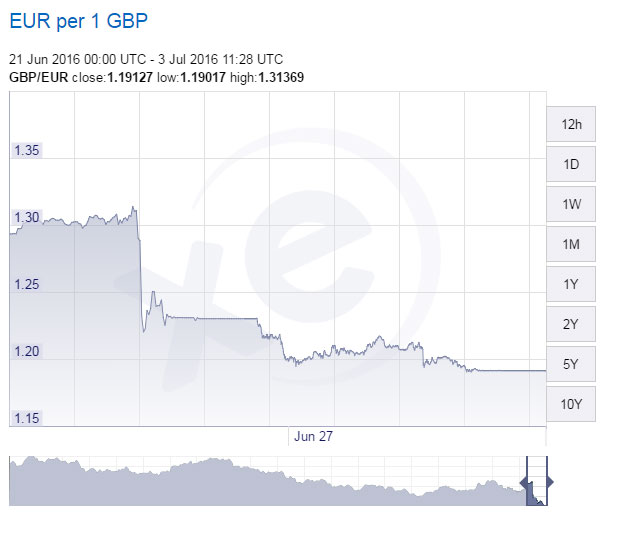 Pre-referendum it was sitting comfortably at around 1.30-1.31 – contrast that to today when one pound will buy you just 1.19 euros.

But let’s take a look at a real life example, so that it’s easier to understand.

Say I’m a German eBayer looking to buy a new mechanical keyboard. I head over to eBay and search for one, seeing an option from a German seller for €125 and one from a UK seller for £100 (both including shipping).

Well at the old exchange rate of 1 GBP = 1.31 EUR the UK seller worked out at €131 Euros. However fast forward to today and the same £100 is only equal to €119, meaning the UK seller is now cheaper than his German competitor.

Which is a good thing right? After all that means more sales for UK companies to the EU.

As that assumes that the cost price for the UK seller stays the same but, as I mentioned earlier, a weakening pound has the opposite effect on imports – it makes them more expensive!

Once again I’m going to look at a “real-life” example to make it clearer, but as the vast majority of us importers pay for our goods in US Dollars, let’s look at how that exchange rate has been affected by Brexit. 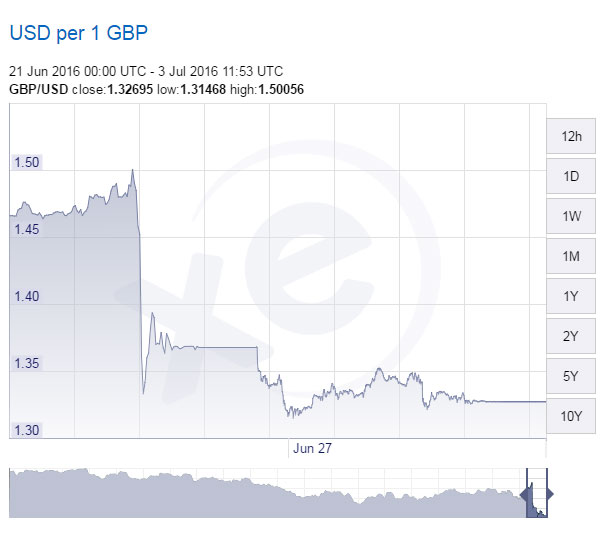 As you can see it’s a similar story… pre-referendum one pound bought you roughly 1.47 US dollars, but today the rate is 1 GBP = 1.33 USD.

That’s a 10% increase in cost, from nothing! And it would actually work out to be an even bigger difference once import duty and VAT are charged on top.

And all this economic uncertainty and negativity currently in the media will only make buyers more wary, and a lot of people will cut back on their consumer spending simply due to fear and as a precaution against a possible recession.

But going back to the weakening pound and hopefully you can now see how detrimental it is to online sellers such as me and you. Of course it is advantageous to businesses selling UK produced goods, but being realistic how much of that is left?

In my opinion it’s impossible for UK manufacturing to ever really grow to anything substantial again – simply because the world has changed and globalisation and international trade has put an end to that.

But the most important thing about the exchange rate changes are that they’re real! This isn’t theoretical talk, saying if this happens or if that happens, the value of the pound really has plummeted over the last 10 days or so and we as importers have to react.

But what can we actually do!? Well it’s the usual conundrum of increasing costs – do you raise your prices or do you reduce your margins? Unfortunately there’s no one simple answer to that question as it depends on your specific business and niche, the level of competition, the price elasticity of demand of the goods you’re selling etc. etc.

A lot of people have emailed me this week asking about how the leave vote will change eBay and my honest answer is I don’t know! eBay themselves have made a statement regarding the vote to leave, which really just illustrates how little is known at this point:

“As a global business enabling cross-border trade for SMBs worldwide, eBay has been a consistent supporter of the EU Single Market and the creation of a true EU Digital Single Market.

We believe there are advantages for both sellers and buyers to be part of large open trade blocks. But our business is a global one and our sellers are successful within and outside the European Union. British voters have decided that their interests are best represented outside of the EU and so we will continue to put the best interests of British SMBs and customers at the heart of what we do.

We will continue to work with the UK Government and at a European level to ensure we are close to any discussions/changes resulting from this vote, which may affect our customers.

Other than the broader implications that we’ve covered, talking specifically about eBay’s rules and regulations and how they’re going to be affected is a waste of time really as it depends so much on whether or not a trade agreement is made and what exactly that agreement is for.

As even if an agreement is made, the VAT registration rules and eBay fees etc. may be different, which is why I only want to cover these things as and when we get some more definite news, otherwise it’s pure conjecture on my part.

So really there’s not much more for me to say at this point. Everything is very much up in the air and business owners are understandably worried – hence the exchange rate volatility.

But I will say this to finish off today’s post – whenever there are difficulties, the best businesses always survive and even thrive – it’s the bad ones that fail! So work on the things that you can control; get all your processes perfected, and simply work on growing your business as normal – both within the UK and abroad, and that means both EU and non-EU countries!

I think this is the topic that I’m most eager to hear your opinions and thoughts on, so please feel free to comment below and I’ll personally answer you within 24 hours, Monday to Friday.